There is no denying that when it comes to food waste, restaurants and cafés have a bit of a problem with surplus food. The free app Too Good To Go launched in Norway, Sweden, Denmark, Germany and France aims to help restaurants and cafes reduce food waste, and gives the user a delicious prepared meal for anything between £1-£5 as long as you don’t mind waiting until closing time. The users also have an option to buy food for the homeless and then a volunteer will pick up the food and distribute it. How do you use it you say? It’s really simple! You launch the app, pick a restaurant or find one close to you via GPS, order a box of food and pay via the app. When you collect all you have to do is to show the staff your receipt and they give you your food. You get a meal, and the business has just reduced food waste.

Olio is a free British app created to make it easier for people to reduce food waste not only in restaurants and café’s, but also in private households. The app is currently only available in the UK, but there are plans about expanding internationally. This app lets users upload pictures of the food item they want to give away and other users can contact them and schedule time and place for pick-up. Restaurants, café’s and local stores can use the app to get rid of their surplus food and thus reduces their own food waste.

Lunchfarm is a Norwegian app targeted at workplaces and offers them the possibility to let their employees order in lunch. For every lunch that gets ordered trough the app, the company will donate to the UN’s World Food Programme (WFP). This app was originally developed with catering as it’s main service, but chose to include a bit of charity as well as one of the founders has a dad that was the director of the WFP. There is a bit of slacktivism involved in the use of this app as all you really have to do is order yourself a lunch, but you do have the opportunity to be updated on how many meals you have donated via the app. The user-friendly app also makes it easy to contribute to the fight against world hunger without “sacrificing” something, as you will not have to give up your meal to contribute. This app also focuses on environment and tackles the problem with food waste as it is the employee’s responsibility to order their own lunch and therefore you avoid the problem of ordering too much food that has to be thrown out. 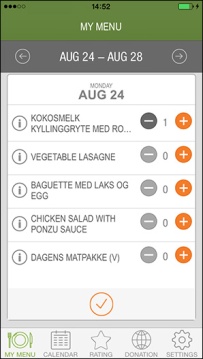 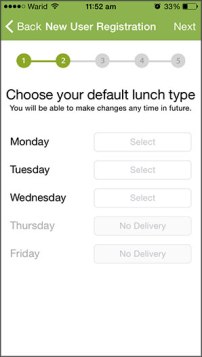 How often do you take photos with your phone? Did you know that your photos could help raise money for charity? The free app Donate a Photo, created by the American pharmaceutical company Johnson & Johnson, lets users upload one photo a day and donate $1 for every photo “donated” through the app. The photos will only be used for promoting the app and not for commercial purposes. With the exception of photos containing crude, vulgar or offensive images or nudity, all images are allowed. So far a whooping 1,072,777 images has been uploaded and raised since April 2013. Imagine the impact this charity could have if all the users uploaded the photos of their meal or workout to this app as well as Instagram!

The last app I’m going to address I really wish I had discovered earlier as it ends on the 31st of March. Charitymiles is a free app that utilises the GPS in your phone and based on what activity you are doing, running, walking or biking, it will calculate how many miles you have travelled. For runners and walkers, the company donates 25 cents for every mile the user has put behind them and for bikers 10 cents gets donated. All the user has to do is to download and open the app, choose the activity they are doing and just put as many miles behind them as they can. Not only are there a health benefit involved for the user, but it is also a way to donate to charity by spending energy instead of money.

So the keyword for the apps I have mentioned is free. Not only are the apps themselves free to download, but some of them doesn’t require the user to donate directly to the charity. Lunchfarm and Too good too go requires some spending of hard-earned money, but you spend it on food for yourself and therefore you do not have to choose charity instead of that baguette for lunch. It is also clear that the apps make it easier for the user to contribute to charities as all they have to do is open an app, scroll and select.

These apps may not only contribute to social change, but also help companies build good reputation for the company. Johnson & Johnson is a big company that probably would have had the money to donate 1,072,777 dollars to charity, but by engaging customers they help build a good reputation for themselves. Therefore it might be best to pur some thought into what app you want to use to help make a social change.

The app by itself might not be the hero Gotham deserves, but it might be one of the gadgets in your utility belt.

Ingrid Berg is a Norwegian person. She loves superheroes therefore she decided to study social marketing to help save the world. As an avid tech geek she loves to look at how technology is used and how it can be used in the everyday life.

The War on Plastic Water Bottles

How I will create change in my community in 2018